I’d been feeling very sorry for myself. Almost as soon as we got to Kolkata, I got sick, possibly from making an egg-in-a-basket that didn’t cook right through. But after 3 days I got better – not so bad. Each previous trip has been the same – sick for 3 to 5 days, then done. I can take it.

After packing up the show in Kolkata, we flew to Delhi to install it there. Within days I got “that feeling” again – not a good sign. At the opening, in a fine silk kurta, chatting to people, I had to frequently excuse myself to run to the bathroom. By the end of the week I was in hospital, with several tubes implanted in my arms, pumping saline, antibiotics, antibacterials, anti-nausea, antidiarrheals. 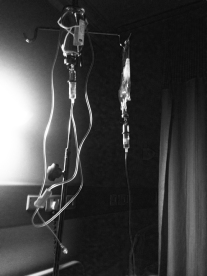 Needless to say I was quite sick and even more miserable. Why does this always happen to me when I come here, to this magical country? Is India telling me I don’t belong so give it up? All I wanted to do was go home. I had already lost 20 pounds and since I was unable to hold anything down, was losing even more. My doctors kept ordering blood test after blood test, each time coming up with nothing specific. I sunk into deep despair. There seemed to be no resolution.

I had a lot of time to think, to shed tears, to feel sorry for myself. I thought a lot about my friends who were in far worse shape: a nonagenarian, who was coping with the aftermath of hip surgery; a friend who was making baby steps towards recovery after paralysis; another who was adjusting to a new life without a colon; yet another who was heading into a 5th round of experimental chemo. All of these people had such great humor and strength and willfulness, which I seemed to lack.

Then there was the man on the other side of the curtain. He had been coming to the hospital since August, every month for 4 days of chemo. It was very evident that he had lost a lot of weight. His skin was pasty, his voice hoarse, he did not have much hair. He always cheerfully greeted me as I passed his bed, heading to our shared bathroom. He always inquired about my health. What right did I have to feel so sorry for myself, to be so miserable, when my situation was temporary and his so permanent and devastating? I had such trouble getting beyond the “temporary” – everything seemed to catapult into the “forever.”

When I was 20 years old I spent a winter in Switzerland, not really attending the University of Lausanne, skiing mostly. Very early in the season, I made a turn, hit a rock and fell 150 meters down the slope, on my back. I thought I was going to die – I actually saw my life rush past me. I thought, this is crazy, I’m 20, I’m too young to die. Eventually I was able to dig in my heels and come to a stop.

A couple of months later I was sitting on a bar stool, turned around and froze, unable to move, in horrid pain. This was the beginning of a lifetime of struggle with my sciatic nerve. One day, while in the physiotherapy waiting room, I started up a conversation with the man in the next chair. He had one leg and started telling me about how relieved he was to be rid of it. I was horrified! I was a skier, young and strong – the thought of losing a leg was anathema. He told me about years of excruciating pain. But now it’s over. He was happy. I thought how lucky I was to have both of my legs – I’ll get through this somehow.

I thought about this one-legged man from Lausanne, about my brave, struggling friends back home, about the man on the other side of the curtain. I thought about my remarkable children who called all the time to cheer me up, about all my friends and extended Indian family who called to encourage me, to say, “come home, we will take care of you.” I thought about how fortunate I was to be in a clean, semi-private room in one of the best

hospitals in Delhi. I thought about the thousands of people in Delhi, in Kolkata, in Mumbai, who live on the street, who have no access to this care. I thought about how blessed I was to have a husband who would pull me out of depression and make me look at what I had in front of me, to make me understand that the “forever” is not forever.

My despair in the hospital was rooted in many things – my natural inclination to catapult, but more importantly, I just wasn’t sure how many more trips I’d be able to make to India, or how long I could stay there. I feel so alive here. I am able to think, to photograph, to create. We’ve made wonderful life-long friends here. Will all this now be in the past?

When Max was in Senegal, he also got very sick. It took him a long while to get healthy again. For a while we thought he might have a parasite. He nicknamed him Wally. He drew a little caricature of Wally on a piece of paper – a wormy creature with a smile. Emma captioned it: “He has Max’s eyes.” We have it pined up in the kitchen. Wally became a “thing” in our family whenever anyone of us got a gastro ailment.

So now I had an Uber-Wally, that just wouldn’t let go. After 4 days in hospital, they released me with no clear diagnosis other than severe gastro-intestinitis. I had many recurrences of “loose motions” (diarrhea), a forever present nausea, a revulsion to food, and extreme fatigue.

It took over 2 months to expel “Wally” completely. I hope to never see him again.