An example of the arrogance of the West—or possibly of the New Yorker that still forms my core—is assuming that major, cutting edge art spaces could only be found in New York, LA, London, Berlin, Paris, Venice and perhaps a few other cities. This of course is nonsense. There are vibrant centers of creativity all over the globe and they are to be found not only in the US and Europe. They may not garner the attention or the sales, but they are genuine places where serious explorations are taking place, often in superbly designed spaces, where there is a history of accomplishment, sometimes going back for generations.

We arranged for our exhibit to coincide with the Delhi International Art Fair, in the hopes that we could entice a few visitors to see Following the Box. We also wanted to begin conversations with other institution as potential future hosts for our work. Jerri was recovering slowly and the fair was a considerable distance from our B&B, but she nonetheless gathered her strength and we toured the enormous fair, easily comparable to art fairs in Chicago, New York or LA. The majority of dealers were from within India, but there was representation from Europe, America and Japan.

One local newspaper complained, however, that an enormous number of people were taking selfies in front of art works they found interesting; at least for the length of time it took to snap a photo. Apparently India has the highest number of selfie deaths in the world—people who step into oncoming traffic while taking a shot of themselves in front of something that seemed momentarily important, or fall of off trains, or out of windows or whatever. As a young community photography instigator, back in the sixties and seventies, my goal was to put photography—this magnificent tool—in the hands of the masses. Technology caught up with me—and now we have billions of photos of pussycats; no understanding that the frame isn’t random; no awareness that all moments are NOT equal. And of course, no physical prints, no albums, no possibility that someone 70 years from now will find a box of photos and follow them half way around the world.

After putting Jerri in a cab so she could get some rest, I went off with two of our participating artists, Aditya Basak and Chhatrapati Dutta to Lado Sarai, a street filled with art galleries. There, in the midst of used tire dealers, roaming cows, sleeping dogs, an occasional religious shrine, street food vendors and assorted evidence of vibrancy, were some 20 first-rate galleries, all with openings to capitalize on the art fair visitors. And of course, there were parties to go along. Art and wine seem to go together universally. An occasional samosa thrown in doesn’t hurt. It was the last day of the fair, and the last day of Following the Box in Dehi. 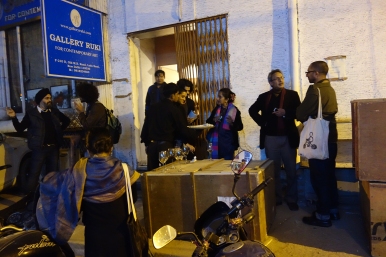 The next day, we took the show down with the help of Mamta Bhatt from the IGNCA Conservation lab and packed up the exhibit. Through the generosity of Sanjoy Roy, we were able to load everything into a truck and have it securely stored. It now rests safely in a Delhi warehouse until the next venue is identified.

Falling into the crate

As I was leaving, I went to see the other major exhibit then on display at the museum. It was a retrospective of 90 year old Satish Gujral, a major Indian artist, who studied with the great Mexican muralists Rivera, Siqueiros and Orozco, and who went on to do significant work in painting, sculpture, even architecture. It was an enormous show, but in gallery after gallery, I saw no one—I was the only visitor. Finally, at the last gallery, I saw 2 people in wheelchairs talking with a young woman. It turned out to be Gujral and his wife Kiran themselves. It was sad to see this magnificent and important artist, with a beautifully designed exhibit…and no visitors. Art is a very strange life. We work so hard, grappling with our inner demons; mastering techniques; probing our minds and souls; struggling with whether we wish to communicate with others or simply explore with no regard for reception; struggling financially; understanding finally that success is a chimera but that it doesn’t really matter. We have to seek joy and appreciate whatever gifts we might have along the way. Perhaps those are some of the lessons learned in India.

Both Jerri and I have been doing exhibits for many years.  Sometimes it’s our own work, sometimes that of other artists.  For the past 25 years, most of my exhibits have been done with my partner Frank Madsen through our museum exhibit design firm Teller Madsen. Even after hundreds of exhibits, there is something still magical about seeing ideas communicated through space, about choreographing visitors’ movements so they may have an emotional response, a new perception, an enhanced awareness of the world around them.  This has always been my goal in exhibit curation and design.  It has to look spectacular—and mean something.

I think we did it here.  Thanks to the Indira Gandhi National Center for the Arts for providing this large and beautiful space for our Following the Box exhibit.  Each of the 12 participating artists responded to a different aspect of the still-anonymous soldier’s photographs from so long ago.  Each brought their own creativity and culture to play as they interpreted the images.  The end result is a cross-cultural exploration of historical imagery, perhaps the first time this has even been done.  We are enormously proud and grateful for the opportunity afforded to us first by the Fulbright grant; then by two subsequent grants from the U.S. State Department; by the faith the Indian artists had in this project; and by the legacy left to us by an unknown soldier/photographer who unwittingly changed the lives of two artists seventy years after the end of the war.